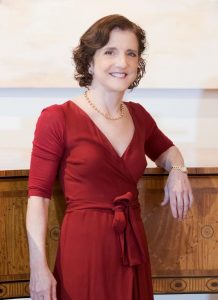 In just over a year as a volunteer, Karen Finkel has become an integral member of the PennPAC team by seizing leadership opportunities and joining the contingent of generous donors.

In 2016, Karen sought a volunteer opportunity that would allow her to make meaningful social impact.  She chose to volunteer with PennPAC because the work “would use my professional experience and appealed to my interests. What I found compelling in PennPAC was the opportunity to contribute using skills that I had already polished and developed over a long business career.” She felt it would be a privilege to volunteer alongside her fellow alums.

After her career on Wall Street as an investment manager, Karen found many opportunities to volunteer, including as a tutor for middle and high school students. But when she attended her first PennPAC one-night ImPACt event at the Manny Cantor Center, she realized the satisfaction of putting her professional skills to use to support young people planning for their futures, who might not otherwise have access to mentoring. “It’s a beautiful thing, sitting around the table with kids with real aspirations and being able to give them guidance.”

Her next PennPAC volunteer effort was serving as a member of our Nonprofit Relations Team (NRT), which Karen found to be the perfect introduction to PennPAC’s varied array of projects and virtual teamwork platform; serendipitously, the NRT experience connected her to a project on which she ultimately worked. Because of her career and PennPAC experience, Karen took on a Team Leader role in her first consulting project. “I was so inspired by what I knew about the project from the NRT process, I thought I may as well step up and make the biggest contribution possible.”

She also felt she had something to learn in this role. “I had never run a virtual project before and thought that would be a great challenge and something important for me to learn to do.”  While she has a wealth of business experience, she also felt that she would have something to learn from her younger teammates “whose backgrounds and vantage point are different.” She looked forward to the exchange of ideas and building new personal and professional relationships.

To anyone considering stepping up to a Team Leader role, Karen says “You can do it! There is not as much uncertainly as you would think. Thanks to the NRT process, the clients are well vetted and have realistic expectations. The projects are very well defined and…the deliverables are achievable. Some very important work has already been done for you by PennPAC’s management team.”

Even before serving on her first project team, Karen was inspired to become a PennPAC donor. “I saw an operation started from scratch and I was so impressed with what had been achieved in the first five years…and the committed individuals running the organization. I know that it’s hard to raise money and I consider PennPAC a very worthwhile cause.”